Change in the garden

Posted on October 14, 2010 by charlesbodsworth

I managed to get out in the failing light this evening to grab some pictures of the garden as I want to watch its progress.  So, first of all, with the house gleaming as the paint goes on, here’s the old back of the place. 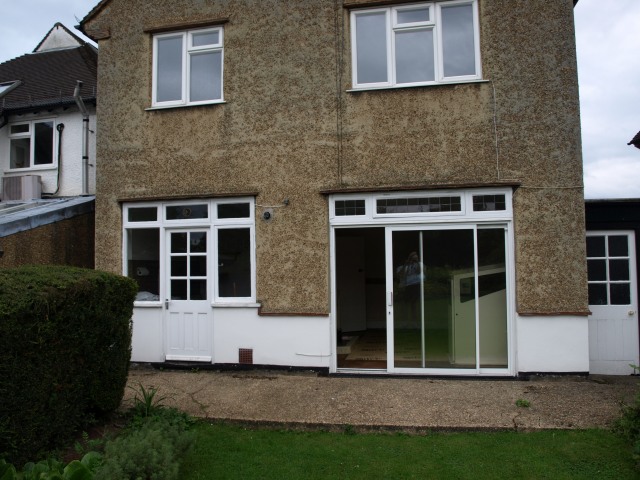 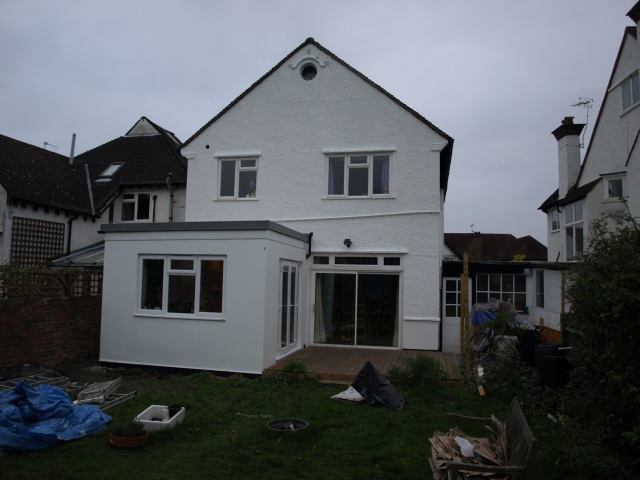 As well as the extension, the major innovation outside has been the deck.  If you mention a deck, the mood darkens, people turn to you with concern and seriousness on their face and intone a warning about the rats.  But the rats appear to be staying away and our deck is a lovely spot; it practically became our living room in the glorious June and July.  But the main reason I want to mark its magnificence here, is I built it.  Apart from the help I got to lift the frame, it’s all my work. 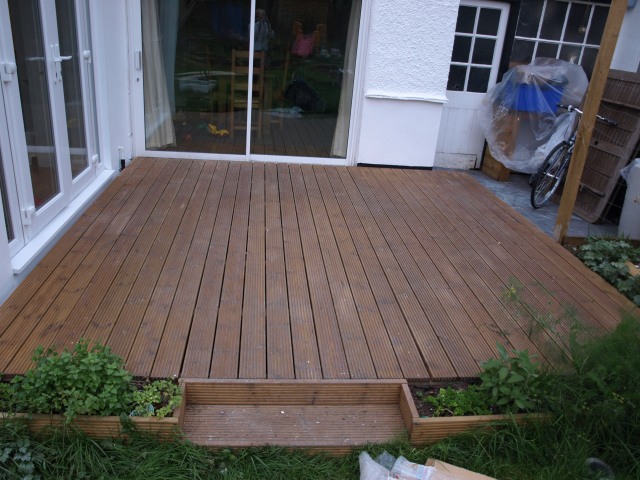 It’s only just visible, but to the right of the deck is some black slate.  I also laid this, but it involved more anguish because I let the grout harden on the tiles.  Had to marshall stacks of wire wool, a gallon of fizzing chemicals and, my secret weapon, the wife, to move that stuff.  As a result I don’t look at it with such pleasure.  Though it is undoubtedly a improvement on the horrible old concrete that now lies concealed, which was definitely letting the side down.

So, on to the garden and a couple of views of the raised beds with the manure in them. 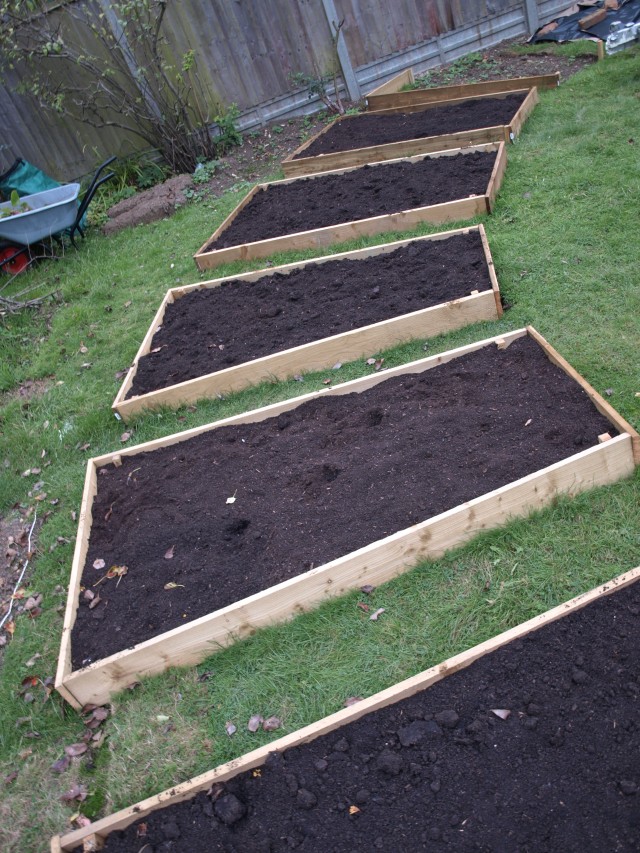 An earlier post showed what pleasure these have brought Mr F.  This is not least because poo (well, “boo”) is one of his few words, so he feels he can discuss the beds with me on a man to man basis.  As a proud dad, I’d like to establish that “boo” is not his greatest linguistic triumph: that would be a toss up between “nana, car!” and “big bee”.  The former comes up more often – in fact pretty much whenever he sees a car and thus recalls seeing his nana actually driving a car.  This event sent shockwaves through Mr F’s world which are still reverberating: imagine, two of your favourite things, on the one hand a nana and on the other hand a car – together! and nana actually driving! and I think you begin to get the picture of the scale of this occasion.

And finally, another innovation I’m really really not sure about.  When I dug up the turf to make the raised beds I had, naturally, a lot of turf.  Disposing of this was going to be a big hassle so I took a tip from a book and built some turf walls.  Well, seats really: a little table and bench set for the children and a curved bench for whoever.  My reading about turf walls seemed to imply the grass would spread and cover them, creating verdant ecological furniture.  So far they’re looking crusty, dry and the grass distinctly peaky.  I record them here for the purposes of comparison in a year’s time.  If they’ve not improved by then, it’ll be goodbye. 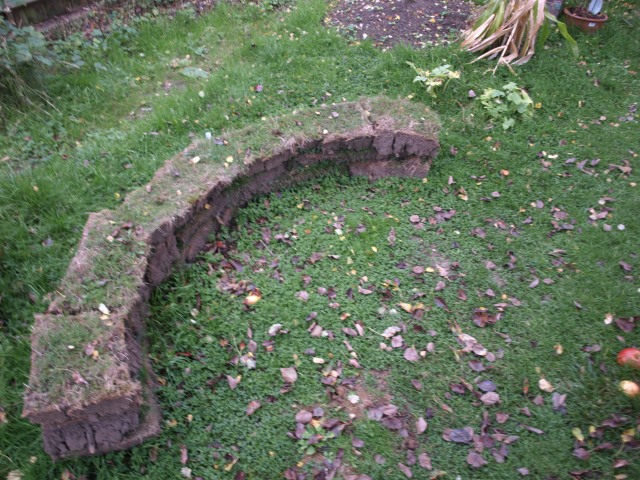 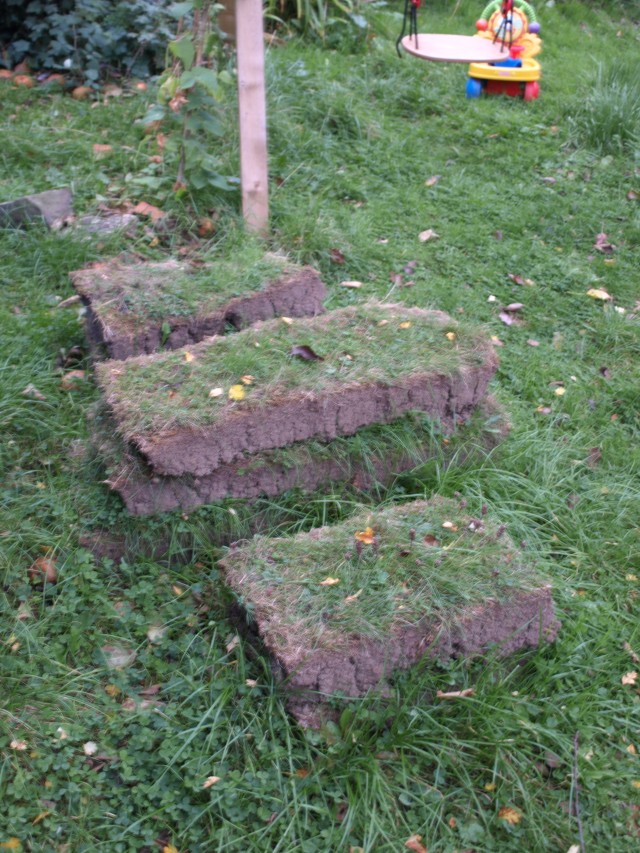 They look chronic, basically.  But they say gardening is all about patience and trial and error.  Plus, if we’re going to make this garden as different as we intend, we need to do something that other people aren’t doing.  We should at least be unconventional enough to make Mr Nasty Neighbour tut when he sees our garden from his window.

After 2000 years of maintenance, my lawn will be quite bearable, I think.

Apologies for the shameless copyright violation and the fact this is in German.  But this is our neighbour’s idea of gardening.

Later on in Asterix in Britain, after the manicured lawn has been driven over, this character gets all red faced and shouty, which is our neighbour’s idea of holding a conversation.  I know this because I mistook some rusted up old bits of pipe jammed in behind our fence, for junk left behind by the previous owner of our house, and thus threw them away.  It turned out they belonged to Mr Nasty Neighbour and weren’t junk at all but Very Useful and Important Pieces of Stuff that he’d been keeping for eventual unspecified use.

I'm a dad of two, web content professional, occasional triathlete and blog about maintaining websites and, more personally, about my growing children and garden.
View all posts by charlesbodsworth →
This entry was posted in garden structure. Bookmark the permalink.